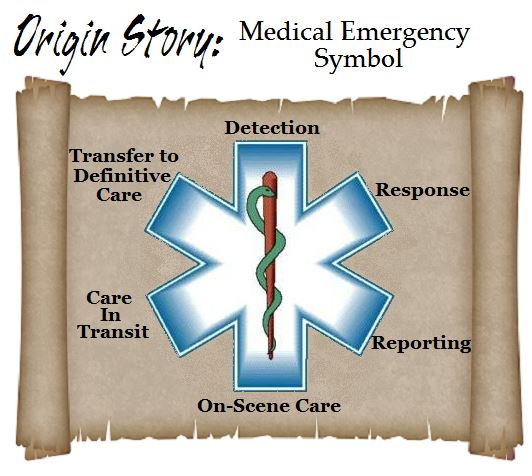 What the heck is with all of the snakes?

In medical circles, there are two very similar symbols that represent healing. One is known as the Caduceus. The other is the staff of Asclepius.

The Caduceus symbol, which has two snakes on a pole that’s topped with wings, is most closely associated with the Greek god Hermes (known to Romans as Mercury).

Asclepius, however, was a Greek physician, the son of Apollo. By the 5th century BC, he was widely regarded as the Greek god of healing and medicine because of the amazing healing powers he possessed. In fact, he was so skilled at surgery and the use of medicinal plants that it was believed he could restore the dead to life. 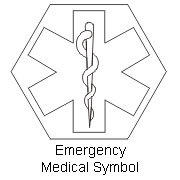 It’s the staff of Asclepius that’s most commonly used as the symbol of healing on medical emergency id bracelets. Asclepius’ staff has only one snake, and no wings at the top. It is the emblem of the American Medical Association. The daughters of Asclepius are well known to us today as Hygeia, goddess of health, and Panacea, goddess of healing.

But, where did Asclepius’ staff design originate, and how did it become associated with medicine? Many trace the origin of the staff back to Moses, the man chosen by God to lead the Jewish people out of Egyptian bondage, and into the promised land.

In the old Testament book of Numbers, God instructs Moses to create a pole with a serpent on it which the Lord could use as an instrument for healing. The scripture reference appears below:

Numbers 21:4-9
4) They traveled from Mount Hor along the route to the Red Sea, to go around Edom. But the people grew impatient on the way; 5) they spoke against God and against Moses, and said, “Why have you brought us up out of Egypt to die in the desert? There is no bread! There is no water! And we detest this miserable food!” 6) Then the Lord sent venomous snakes among them; they bit the people and many Israelites died. 7) The people came to Moses and said, “We sinned when we spoke against the Lord and against you. Pray that the Lord will take the snakes away from us.” So Moses prayed for the people. 8) The Lord said to Moses, “Make a snake and put it up on a pole; anyone who is bitten can look at it and live.” 9) So Moses made a bronze snake and put it up on a pole. Then when anyone was bitten by a snake and looked at the bronze snake, he lived.

Clearly, a snake bite could be considered a ‘medical emergency’. The healing pole certainly provided a quick cure, and it was probably used quite often during the period the Jews wandered in the desert. But, after Moses’ death, the Jews began to ascribe more power to the pole than to the one who actually supplied the healing power. The people of Israel burned incense to the pole and worshiped it, calling it Nehushtan. We learn in the old Testament book of 2nd Kings (chapter 18) that Hezekiah, one of the few good kings of Judah who lived around 715 BC, broke Moses’ pole and destroyed the bronze serpent. God honored Hezekiah’s move to draw the people away from idol worship, and the scripture tells us that the Lord was with Hezekiah and he prospered in everything that he did.

Today, millions of people with chronic illnesses rely on medical emergency bracelets displaying the Staff of Asclepius to alert medical emergency personnel to their illness and to the medications they are allergic to. While the id bracelet bearing the Asclepius emblem provides a certain peace of mind for its wearer and their loved ones, there are those who sense an added benefit that comes from wearing a bracelet that bears the symbol originally prescribed by God. But, as we learned from the story of Hezekiah, there is no special healing power associated with the symbol itself. It’s the faith of the person wearing the bracelet that will ultimately invoke God’s healing power. 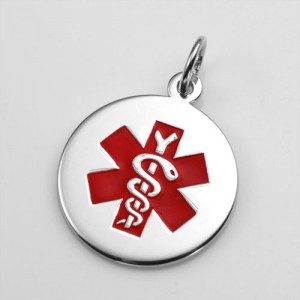 Where did Medical ID Bracelets Originate?  For that, we need to return to Chicago in 1963...

Over sixty years ago, the American Medical Association—headquartered in Chicago—met with several people in response to a need for a design and program to alert others of a special medical condition when a person was unable to communicate. When the program was announced, Don and Genny Bennett, newlyweds living in Chicago, went to the AMA offices to discuss the program. They proceeded to design a medical alert necklace and metal wallet card with a custom-engraved symbol. Their company, then known as National Nameplate Co., was included in a national mailing by the AMA to all U.S. pharmacies. And, the medical id bracelet was born.  Over time, the name was changed to Oneida Medical ID Jewelry, and Oneida continued to be one of the leaders in medical id bracelets and medical alert pendants and wallet cards.  Shown below is a page from the August 1964 edition of the Journal of the American Medical Association. Oneida was included on the identification card that was published by the AMA and referenced in the article. 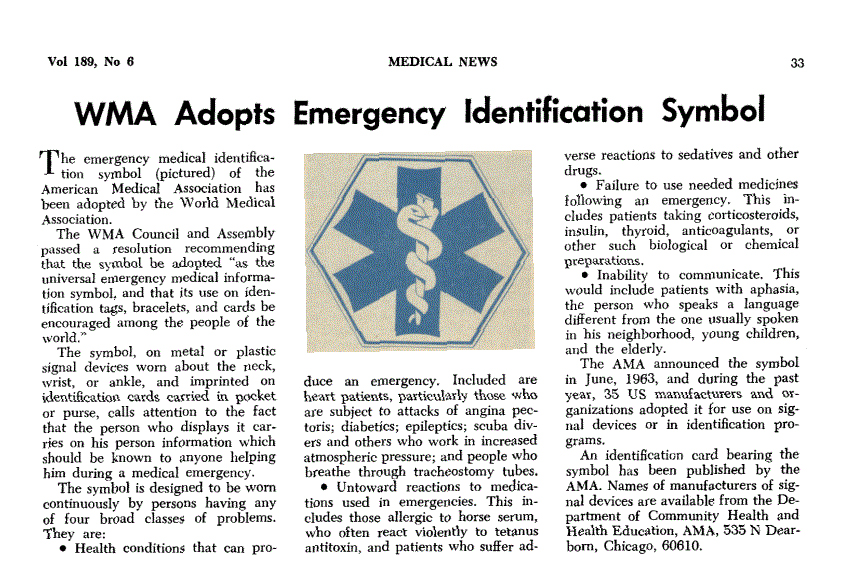 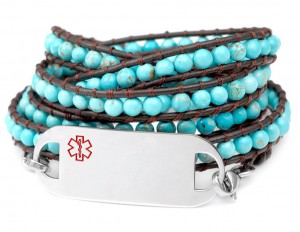 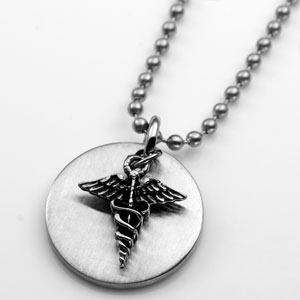 When requesting engraving for a medical bracelet, the most important thing to be engraved is the patient’s condition and allergies. Depending on available space, the next most important information is the name of the patient, and the phone number of an emergency contact person. And, while many fonts and font styles may be available, it’s best to select a member of the Block Font family, such as Plain Block, Block Fifth Avenue, University, Futura Outline, or Parisian for engraving medical emergency information.